The Championships were established in 2013 with the main aims of:

Categories are designed to provide a forum for top level competition as well as a positive and encouraging environment for school pipe bands with minimal or no competing experience. Schools should ensure that they enter into the spirit of the event by selecting carefully the most appropriate category, or grade, in which to take part.

Please note that the Debut ‘A’ category introduced in 2017 has been removed.  Bands that would have entered this category will now play in the Junior ‘B’ Grade.  Please note the playing requirements for your categories, or grades.

The Championships are independently organised by the Scottish Schools Pipes and Drums Trust (SSPDT) but carry the support of the Royal Scottish Pipe Band Association (RSPBA).  They are not an RSPBA competition and are not run under RSPBA rules.

If a school is unable to enter a pipe band due to lack of players, a combined schools pipe band may compete provided that all the players are from schools (primary and/or secondary) within the same education authority.

If a pupil is eligible to play for both a school pipe band as well as a combined schools pipe band, priority should be given to the school pipe band unless the relevant head teacher gives permission to the contrary. A pupil cannot play in both bands.

In all competition categories and grades one adult instructor may play either as pipe major or, in the case of the Freestyle Musical Ensemble category, one adult either as conductor or leader. No other adult players are allowed.

All pupils must be in full time education at their school at the time of The Championships.

No pupil will be allowed to play in more than one of the competing pipe bands or piping quartets.

Pipe bands and piping quartets must submit online in their entry form:

Any changes made prior to the competition must be notified to the organisers.

The minimum number of players in each pipe band must comprise:

Bands playing with less than these numbers will be disqualified.

There is no maximum limit of players.

SSPDT supports the development of school pipe bands that can be sustained long term.  Pipe bands formed only for the purpose of competing at The Championships with no expectation of continuing are not encouraged. 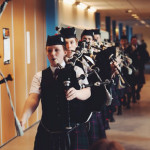 For Novice Juvenile ‘A’ and ‘B’ all tunes must be selected from the list of tunes prescribed on the RSPBA website – www.rspba.org (and may include parts one and two of the four-parted tunes).

Open only to RSPBA-registered school or combined schools pipe bands in the Juvenile Grade.

Open only to RSPBA-registered school or combined schools pipe bands in the Novice Juvenile or Grade 4 ‘A’ Grade.

Open only to RSPBA-registered school or combined schools pipe bands in the Novice Juvenile or Grade 4 ‘B’ Grade.

Pipe Bands that are NOT registered with the RSPBA

Pipe bands in each grade or category (Junior ‘A’, Junior ‘B’ and Debut)  may include pupils who are registered with RSPBA community pipe bands provided that they comply with the following conditions:

It will be the responsibility of the school/ combined schools to decide the category or grade in which they wish to compete, and, if necessary, to justify to the organisers the reasons for their decision. The organisers retain the right to allocate a band to a different category or grade.

Open to school or combined schools pipe bands from schools:

The Debut category is for schools that have no recent history or tradition or piping. The parent body of The Championships, the SSPDT, exists to promote piping in schools where pupils have no opportunity to learn piping and drumming in class like other musical instruments. The debut category exists to give competition experience to schools, or combined schools, which would otherwise feel unable to enter a pipe band competition. The category is not for beginner pipers from schools that have established bands. The piping inexperience of the pupils is irrelevant: those schools, or combined schools, with a tradition of piping are not permitted to take part in Debut. 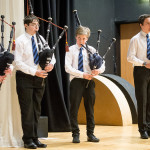 Open to schools unable to form a pipe band but that wish to give pipers a competing experience. Combined schools quartets may also enter the competition provided that all participating pupil players attend schools within the same education authority.

Schools or combined schools without a pipe band may enter up to two quartets, after negotiation with and subsequent invitation by the organisers. A combined schools quartet should not contain a player from a school which enters a quartet in its own right. There is no limit to the number of years a pupil may compete as part of a school quartet. 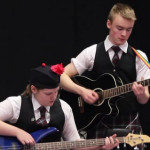 Open to all schools or combined schools that have entered other Championships competitions. Whilst a less constrained and more informal category, this event is nevertheless intended to be a serious if somewhat different competition aimed at highlighting the versatility of piping and drumming percussion.

There will be only one category for the event.

Each school or combined schools participating in the pipe band or quartet competitions may enter only one concert-style pipe band or musical ensemble.

Each Freestyle band must comprise at least six players, of whom at least two must be pipers and one a drummer (not necessarily a pipe band drummer).

One adult only may play either as conductor or leader. No other adult players are allowed.

Choice of music will be entirely up to the school or combined schools concerned, but the piping and drumming element will be expected to be prominent.

A maximum of eight minutes to set up is allowed.

A maximum of five minutes playing time is permitted.

A maximum of 15 entries is allowed for the competition, on a first come first served basis, as the intention is that the freestyle musical ensemble competition will run for no more than half the day due to time and accommodation constraints.

A drum kit will be available, so there is no need to bring your own:

We will also supply a keyboard on stage, which will be a Roland RD600 (or newer equivalent). It has a transpose function. The keyboard will be factory pre-set so, should you choose to use any of the onboard sounds, they will be available. We would encourage you to use this keyboard rather than bring your own.

You need to bring all your own instruments (e.g. guitars, fiddles), pedals and jack-jack leads with you to the event (less drum kit and keyboard).

Take a look at our videos (view all)

Tweets by @Piping4Pupils
Follow The Championships on social media

Our 2020 Sponsors and Supporters

The thrill of competing – the friendship of fellow musicians.

We use cookies to ensure that we give you the best experience on our website. If you continue to use this site we will assume that you are happy with it.Ok